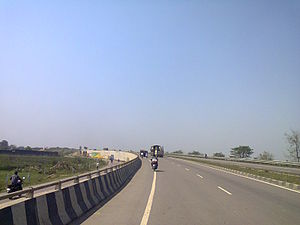 The ethnic city Ayodhya has a strong transport system as the city is visited by numerous devotees every year. The city has well-versed roadways and railway facility using which the travelers can reach in and out the city without much hassle. The city does not own an airport; the nearest airports are the Faizabad airport at just 5 km, Lucknow's Amausi airport at 134 km and Allahabad airport at 166 km away from the temple city Ayodhya.

Ayodhya has good roadway system as national highway, state highway and numerous major roads pass through the city connecting Ayodhya with its adjacent cities, towns and nearby districts of Uttar Pradesh. The NH 28 passes through the boundary lines of Ayodhya at two different locations of the city. The NH 28 on passing the Ghaghara River touches Ayodhya at Ram Katha Park locality where it connects itself with the state highways UP SH 9 in the same locality.

The NH 28 and UP SH 9 form the bottom boundary of Ayodhya at Harikarapure, Sultanpur Bachada, Ashapur and Saketpuri localities of Ayodhya city. The NH 28 connects Ayodhya with its neighboring localities like Maheshpur, Katra Bhogchand, Jafrapur, Keshawapur, Ram nagar, Madoi, Munderipur, Vikramjot, Kaulpur, Pachwas and many other localities near the city. The UP SH 9 passes through the Ghaghara River and touches the city at Theri Bazar locality and runs through Ram Katha Park locality where it merges with NH 28. The NH 28 connects Uttar Pradesh state capital Lucknow with Barauni city in Bihar passing through Ayodhya; it is of 570 km in length. Through the NH 28 the travelers from Ayodhya can easily reach major cities in the state like Lucknow, Faizabad, Gorakhpur and Muzaffarpur. The UP SH 9 connects the city with its adjacent localities like Manjha Kala, Katra Shivadayalganj, Shobhapur, Hariharpur, Chandapur, Adarsh puram, Mandakini nagar, Deen Dayal nagar, Karaundia, Jogitara, Naka and many other localities nearby Ayodhya.

The other major roads running within the city are the Chowk Ayodhya road, Panckosi Orbiting Path road, Kosi Parikrama road, Dant Dhawan Kund- Ahirana Marg road, Tulsi Bari Main Street and many other roads connecting all areas and localities in the city.

The Ayodhya bus station in Ram Katha Park and the Old bus station in Sai Nagar operate government and private buses for the locals to travel to all localities in the city apart from outstation trips.