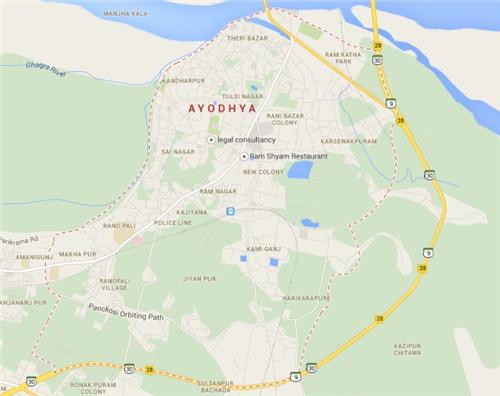 Ayodhya, also popularly called as the “Holy city”, resides on the banks of River Ghaghara and River Saryu and it belongs to the Faizabad district of Uttar Pradesh. Ayodhya city is considered as city of worship. The city is termed as the holy city of India as it is considered as the birth place of Lord Rama and the great Indian epic Ramayana is said to have its origin in Ayodhya. The city is also known as “Saket”. The holy city lies very close to its district headquarters Faizabad. The city, in ancient period, was the capital city of Kosala Kingdom. The city is very popular for its tourist spots especially its shrines of all disciplines for the reason which thousands of tourist visit the city every season. Hindi and Urdu are the most spoken languages in the city and constitutes the residents of all religions and communities.

The holy city covers an area of about 10.24 sq km. Ayodhya city is elevated at a height of 93 meters above sea level which is about 305 feet and the city has its coordinates at 26.80° North latitude and 82.20° East longitude. The city forms its boundary with River Ghaghara. The city also has numerous water bodies namely Dant Dhawan Kund, Ram ki Paidi, Vibhishan Kund, Vidhya Kund and Sita Kund apart from many small ponds and taalabs.

The major cities nearby Ayodhya are Faizabad at 6 km, Gorakhpur at 130 km, the state capital Lucknow at 139 km, Allahabad at 173 km, Varanasi at 204 km, Mirzapur at 211 km, Patna at 360 km and Ranchi at 556 km from Ayodhya. The nearby major districts are Gonda at 49 km, Basti at 58 km and Ambedkar Nagar at 59 km from Ayodhya. The city experiences a humid subtropical climate which is very similar in most of the central Indian regions. Days are hot and nights are very cold in Ayodhya.

The city also has good transport facility. As per 2011 census, the total city population of Ayodhya is 55, 890. The density of population in Ayodhya is 5458 inch per sq km.

The holy city Ayodhya was founded by Sraddhadeva Manu son of Vivasvat. Sraddhadeva Manu was considered as the first man in Vedas and he was the law-giver for the Hindu religion. As per Ramayana, the city is nearly 9000 years old. Lord Rama the seventh avatar of Lord Vishnu born in Ayodhya as per Hindu mythology. As per Ramayana the holy city was the capital of Surya dynasty for many centuries during that period the city was called as Kaushaldesa, while Lord Rama is considered as the most popular and illustrious kings of the holy land. Many Hindu scriptures have their episodes pictured with the holy land Ayodhya as milieu. People also say that the city was founded by King Ayudh.

The eldest son of Vaivasvata Manu King Ikshvaku was the first to rule Ayodhya under Surya dynasty. The other popular kings who ruled the holy city were King Prithivi who was the sixth king of Surya dynasty, Mandhatri, Harichandra who was renowned personality for his truthfulness, Surya Vamsa, Raja Sagar and King Raghu. After King Raghu, Suryavamsa was called as Raghuvamsa. The grandson of King Raghu was King Dasaratha who is the father of Lord Rama.

Religions like Hinduism, Islam, Buddhism and Jainism thrived in the holy land at varied time periods. The 1st, 2nd, 4th, 5th and 14th Tirthankars were born in the holy city.

Ayodhya is one of the seven holy cities in India apart from Mathura, Varanasi, Maya, Avantika, Kanchi and Dwaraka. Ayodhya is also considered as a source of “Moksha” as per “Garuda Purana”. Skanda Purana consider Ayodhya as the most sacred city in India. Atharvaveda illustrates Ayodhya as “a city built by God and being prosperous as paradise itself". As per Jain Agams Ayodhya is considered as one of the holy cities in the earth that never cease to exist in the course of evolution.

Ayodhya, a popular tourist destination in India, is situated amidst many other popular places of interest in Uttar Pradesh like Faizabad at 6 km, Basti at 62 km, Sravasti at 94 km and Pratapgarh at 110 km from Ayodhya city. All these tourist spots are easily reachable from Ayodhya.

The ethnic city of Ayodhya has a modest lifestyle. People in the city are very traditional and they are very particular about following traditional customs and practices. The people also consider themselves privileged to live in a city which is very sacred and was also the birth town of Lord Rama.